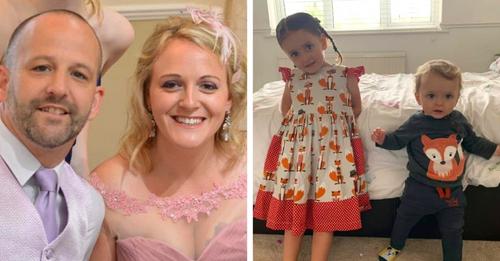 When Rachel and her husband Mac McCarthy say they had twins born two years apart, no one seems to believe the news. If they are twins, they should have been born on the same day or, in any case, at a short time apart, right? Rachel and Mac, however, explained how 4-year-old Jorgey McCarthy and 2-year-old Vinney McCarthy were conceived by in vitro fertilization from the same batch of embryos as their parents. Although they were born two years apart, this detail makes it still twins (not identical).

Rachel’s husband Mac already had two daughters from a previous relationship and had had a vasectomy. For the new couple, the only chance of having biological children was to try in vitro fertilization, since the operation to “undo” Mac’s vasectomy had not been successful: “The reversal of Mac’s vasectomy didn’t work, Rachel says, so we knew in vitro fertilization was the only way to have children. After having set aside ten thousand pounds, the couple chose this path.

Rachel and Mac had to travel to Spain to begin treatment, which lasted several months and was not without difficulties. The couple had to endure two major disappointments after the first two treatments failed; on the third, finally, after 18 months, something seemed to be different: four embryos had finally been created. The couple decided to freeze two and transfer the rest to Rachel: “From the first transfer, I was pregnant with twins, but at the 12-week ultrasound, we discovered that only one had survived: Jorgey .

“It was difficult,” Rachel continues, “because I was thrilled that one baby survived, but at the same time I was really sad that the other didn’t. I felt guilty for being happy.”

The couple knew that the two remaining embryos represented their last chance to have another baby and so they made this last attempt. History repeated itself in the same way: only one child had managed to survive, Vinney.

Since then, Vinney and Jorgey have been inseparable. Rachel said: “Two years is a big difference when they’re little, so much so that people can’t believe it when I say they’re twins.”

After all these attempts, Rachel and Mac have finally succeeded in realizing their dream and can now enjoy their family life with peace of mind. Best wishes !

a smile from ear to ear!
Summer is the time for relaxation and the sea. But it’s not just people
This website uses cookies to improve user experience. By continuing to use the site, you consent to the use of cookies.