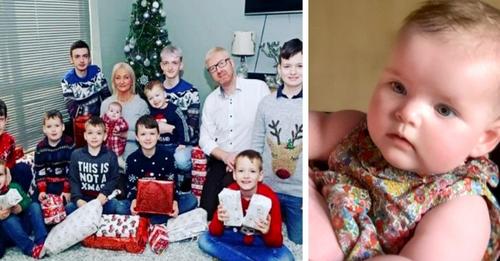 It happens to many people to strongly desire the birth of a child. Often, it does not matter whether the unborn child is a boy or a girl, but rather that he is healthy and grows up calm and strong. After all, children are a blessing, so there’s no need to over-rationalize the gender issue.

A Scottish mother knows something about it: she gave birth to no less than 10 boys and it was not until the eleventh child that she had the joy of welcoming a little girl. But let’s discover together the story of this very large family.

Originally from Aberdeen, a charming city in Scotland, the Brett family became famous on the web for an unprecedented record in their country: the couple gave birth to 10 boys one after another. A record that earned them great fame and made them an “original” family. But despite the popularity and stories mum Alexis, 39, was posting daily on social media, it wasn’t enough for them and they decided to give birth to their eleventh child.

“I was convinced it was a boy too,” the woman said. When they told me it was a girl, we were speechless, but we were so happy about it”. The little girl was therefore welcomed by her mother Alexis and her 44-year-old father David. The first reaction was amazement, of course anyone would have reacted that way, but then came the joy, excitement and satisfaction of being able to raise Cameron.

“Our daughter has 10 brothers aged 2 to 17“, explains his father. “They’re all competing to be near her, they want to hold her, feed her and make sure no one makes noise while she’s sleeping so they don’t disturb her.” So many big and small men who take care of the newcomer and love her infinitely.

But was having so many children a choice or an accident because they hoped that sooner or later a little girl would arrive? A question that many have asked these two parents and to which they have answered with an emphatic no. Having a little girl was not their primary goal and each child has been an immense happiness. Of course, they’re now more determined than ever to stop there, and apparently Cameron is destined to be the last child in the Brett family.

A decision Alexis and David also made because of the amount of work that needs to be done at home every day to support such a large family. “We have a lot of children at home, but we like cleanliness, so we clean, tidy, wash and do about 50 washing machines each week“. What’s great is that, as these two parents said, they don’t feel the brunt of daily chores at all. They only need to look children in the eye, laugh at a joke or gesture to feel rewarded for everything they do.

It only remains for us to wish a good life to this wonderful team.

He sees an elderly woman waiting in line to fill up her car and decides to pay him: a golden boy!
As a motorist, it is obvious that part of the monthly salary will necessarily

The most beautiful legs in America: Kylie Jenner in a bold miniature caused a stir
The Kardashians reality TV star loves the provocative look. After the birth of her
This website uses cookies to improve user experience. By continuing to use the site, you consent to the use of cookies.