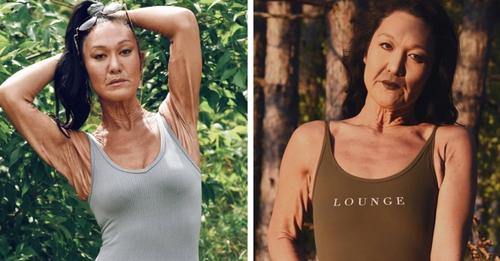 It is important toaccept your body and to learn to feel good about yourself, because only then can you finally feel good with others. It is certainly not easy to accept oneself as one is, in a society that never fails to remind others how they should behave, dress and wear makeup, but it is absolutely necessary if one wants to achieve some personal happiness. Sara Geurts is a 31-year-old woman who has learned to accept her body despite a rare genetic condition that makes her look much older than she really is. Today, she’s no longer afraid to show her wrinkles and saggy skin because that’s what she stands for, and she has an important message for all the girls, young and old, who are still struggling to s accept as they are.

Sara Geurts is now a fairly well-known public figure in the fashion world and on social media; a popularity that she certainly also obtained thanks to the singularity of her appearance. The young woman carries the Ehlers-Danlos syndrome, a rare genetic disease that impairs connective tissue. In her case, the skin on her body is saggy and wrinkled, giving her the appearance of an elderly woman. This rare disease was diagnosed when she was 10 years old and since then Sara has had serious problems accepting herself, preferring to cover her body, considered a source of shame, with blouses and long pants. Today, the young model is much more sure of herself, so much so that she appears in a bikini in photos on her social networks.

Today, Sara considers her skin to be “the most interesting part” of her body. Several years ago, this self-conception would have been unthinkable for her, especially since she continued to grow up with a genetic disease of which little or nothing was known. However, with the help of her friends and family, Sara was able to overcome prejudices and insecurities and also shine the spotlight on this rare disease.

“When I changed the way I looked at myself, I discovered a beauty in my body that I had never seen before,” the model said. Isn’t that the key to being happy and at peace with yourself and with others? We are sure that the path is not easy, but we hope to follow it every day.

A father embarrasses his daughter at the restaurant: “Waiter, she thinks you are very cute, you know?” (+VIDEO)
Teenagers know that their parents can embarrass them at any time, especially some particularly

Top 10 photos of girls whose makeup has transformed them beyond recognition.
It is well known that modern professional makeup can gently correct all facial imperfections

She is unable to smile. 10 photos of a paralyzed girl who became a model
Tayla Clement, also known as “the girl who can’t smile”, opened up about how
This website uses cookies to improve user experience. By continuing to use the site, you consent to the use of cookies.