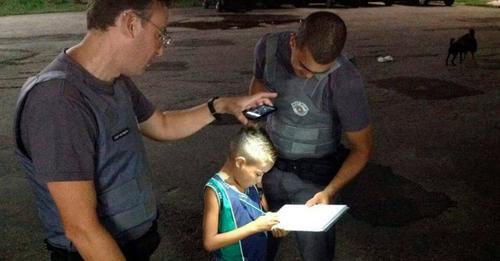 What do we do when we find ourselves “in difficulty”? The most obvious answer is “ask for help”. Depending on the scale of the problem, most people are instinctively inclined to seek support from the authorities when they find themselves in a particular situation. A cute little kid from São Vicente, in rural São Paulo, Brazil, took this social norm at face value. Faced with a “big problem”, he decided to ask the military police for help. However, the police were surprised to find out the real reason for his request, without however complaining.

On an ordinary evening, after a routine check at a local community center, officers from the 39th Battalion of the Interior Military Police were accosted by a child on the street near his home. “As soon as he saw us, the little boy approached us saying he had a big problem to solve, says a policeman. Officers offered to help him, but they didn’t expect the ‘problem’ to actually be a ‘maths problem’ which he was having trouble solving and therefore needed help ”, they say.

The little boy candidly told the officers, “You are the military police and you solve all the problems. That’s why I came to see you. That’s a big math problem!” Wasting no time, he opened his notebook and showed them what was bothering him so much. Being at the end of their shift and in the absence of more urgent cases, the police smiled and paid attention to the little citizen, lighting up his notebook with torches to help him with his homework. The tender scene was immortalized in photos, which were then shared on Facebook.

The post went around the world, touching Facebook users: “There are a lot of good police officers, who really want to help society. They honor the uniform they wear! Bravo for the attitude. God bless you every working day,” one person wrote. “Congratulations on this act of humility and service to society,” added another.

“I am speechless ! I found beautiful the way the boy asked for help and the policemen who then helped him! A beautiful attitude on both sides,” wrote a young woman. “That’s how we should feel in front of our military police, just like this child. Congratulations to those police officers who saw the innocence of this child,” another person added.

The Story of a Giant Actor Who Could Play Bigfoot With Little or No Makeup
The career of this extraordinary actor was not long, only 6 years. But during

A gorgeous cat with such a cute sleepy face will totally charm you
Setsuko is a beautiful cat. With her immaculate white fur and piercing blue eyes,

“She turned into an old woman.” the paparazzi showed the weakened face of Monica Bellucci without photoshop.
Monica Bellucci has always been an exemplary actress. She is an icon of style,
This website uses cookies to improve user experience. By continuing to use the site, you consent to the use of cookies.