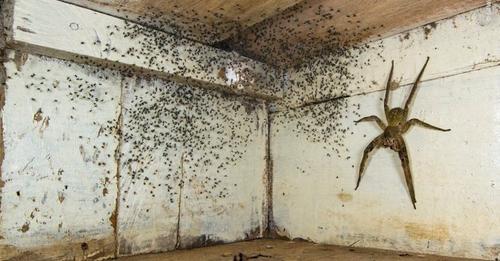 It is a rather unpleasant vision that a man had while looking under his bed. Enough to make sleepless nights for long months. Indeed, one of the most venomous spiders in the world had taken up residence there and had given birth to hundreds of young.

Photographer Gil Wizen was at a nature reserve in Napo, Ecuador, when he saw something impressive. Small spiders had appeared all over his room. After looking under his bed, he got a very unpleasant surprise.

But, because every downside has an upside, Gil took a shot. He won this month’s wildlife photographer of the year award in the Urban Wildlife category with the photo in question “The spider room”.

The photo was taken around 2014 and Gil shared on his blog:

“Not only were there literally thousands of spiders under the bed, but right next to them was one of the biggest ‘non-tarantula’ spiders I’ve ever seen. […] Its body length was 45mm, but with the width of the paws, it easily covered my hand.”

The spider in question was a Phoneutria ferra, also known as the banana spider. They belong to the family Ctenidae and the genus Phoneutria.

This is one of the most poisonous spiders on earth and also very aggressive and fast. For people, especially children, a bite can be fatal. Fortunately, there is an antidote.

In short, a real nightmare! No one wants to find a spider under the bed, let alone a very poisonous spider with thousands of babies!

Biker Millie is the most charming biker who has captured thousands of hearts
A lonely and very modest Washington man left $11 million for charity after his death
“One looks like her dad and the other her mom”: the unique twins are 13 years old.
Deaf dog, rejected five times, finds a home and learns sign language
A young single boy became a hero father
Blondes choose pink. Charlize Theron was ‘caught’ by the paparazzi in Los Angeles
A unique cinema has been opened in Switzerland, where you can watch a movie while lying down
Elizabeth, 35, and her son have unusual eyes: half black, half blue
This website uses cookies to improve user experience. By continuing to use the site, you consent to the use of cookies.